A new method for translocating rare waxcap fungi developed by our Principal Ecologist Barry Wright could offer considerable cost savings for construction and development projects and has recently been featured in both British Wildlife and In Practice magazines.

Rather than moving whole turves in order to translocate the waxcap fungi affected by the construction of a link road, Barry used an ultra-low impact, low-cost method of spore translocation. This potentially represents a new, more efficient method of mitigating the impact of a range of developments on ecologically important grassland.

The translocation method developed by Barry had a significant cost saving over more traditional turf moving and achieved the client’s aim of attempting translocation while accommodating the landowner’s requirements.

Below is a summarised version of the full case study, versions of which featured in British Wildlife and In Practice. 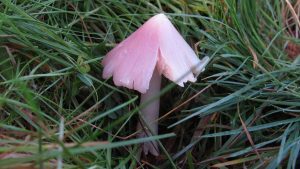 During the early stages of construction of the Heysham to M6 link road scheme near Lancaster by Lancashire County Council, the pink waxcap (Hygrocybe calyptriformis; listed, at the time, as a British Red Data List species (Ing 1992)) was discovered on site. To mitigate the issue, it was proposed to translocate all waxcap species impacted by the development to a nearby mitigation area acquired by management agreement. Our Principal Ecologist Barry Wright, consulting ecologist for the project developer ADAS at the time, was tasked with translocating the waxcaps.

Grasslands that support fungi are under threat nationally and internationally from agricultural improvements. Waxcap fungi (the genus Hygrocybe) are a colourful group of grassland fungi that are very noticeable in grasslands in the autumn when they fruit. Waxcaps are largely confined to growing in grassland, generally in pasture where the turf is kept short by grazing or areas that are mown such as golf courses and church burial grounds. Some UK waxcap species are regarded as rare and listed as Species of Principal Importance (formerly UK Biodiversity Action Plan (or BAP) species). 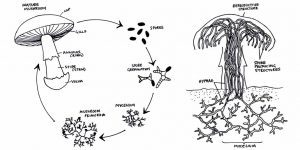 Although the pink waxcap was later removed from the Red List, Lancashire County Council honoured the translocation attempt. During a public inquiry in 2007, it had been agreed that waxcap-rich meadows were biologically important and worth protecting or mitigating for potential adverse impacts.

The other challenge was that, to date, there was no proven track record of success even for the standard waxcap translocation method using turves containing waxcaps. As underground mycelia (the vegetative part of a fungus) can take over twenty years to reappear after disturbances (Griffith et al 2004) to the extent that they can once again produce fruiting bodies (i.e. waxcaps), proving success of translocation can be difficult.

Barry proposed the use of environmental DNA (eDNA) testing to analyse soil samples from the area that received the translocation of spores and look for the presence of waxcap DNA in order to determine success of translocation prior to the production of fruiting bodies.

Previous surveys had identified locations within the management agreement mitigation area with similar vegetation to the waxcap-rich site that would be lost, but where there had been no evidence of fruiting waxcaps found since surveys began in 2003. It was believed that these vacant areas potentially did not contain waxcaps due to wind dispersal being restricted by waxcaps’ tendency to nestle in the grass. Therefore, artificially moving fertile caps into these vacant areas and allowing spores to be shed directly into the receptor areas could theoretically have a good probability of creating new waxcap colonies, particularly given vegetation similarities between the sites.

Waxcaps develop caps mainly during the autumn, so collections were made between 19 September (before the first caps emerged) and 4 December (when the number of caps was very low due to the cold weather). This was timed to ensure that early species and specimens were not missed. The candidate donor areas were walked in a zig-zag pattern with each leg approximately five metres from the previous and repeated weekly using a GPS track back function.

The location of each donor cap or caps (often small colonies of five to twenty caps were found close together) was recorded as a waypoint on a GPS device and the number of caps and their species recorded. All sporulating (meaning those producing spores) fruiting caps of any waxcap species visible were collected and separated into species groups to allow representative numbers of each species collected to be apportioned to each receptor location. 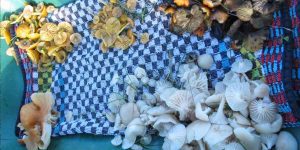 A typical mixed collection of caps in a trug

Translocation was carried out by moving sporulating waxcaps to receptor sites, where they were placed gill-side down to allow them to shed their spores naturally into the receptor turf. Only two caps of pink waxcap were found and both were translocated.

This translocation was carried out in autumn 2014, so success cannot yet be determined. However, the site will be monitored for the next 20 years of the management plan and funding for future eDNA analysis is hoped for to enable assessment of whether soil in the receptor sites contains waxcap DNA. Waxcaps can form new colonies from spores and, as high concentrations of spores were deposited into comparable receptor areas, the probability of success is believed to be high.

Barry Wright says: “Going forwards our aim is to eDNA barcode the donor and receptor areas as well as the remaining vacant areas that did not receive the ripe caps to compare waxcap presence. We hope to answer questions such as: Are the vacant areas truly vacant or did they already contain the waxcap species that were translocated? Have the spores deposited from the donor site germinated in the receptor sites, in which case can they be detected yet?

“This analysis will allow us to detect success or failure in advance of any colonies becoming established enough to produce fruiting bodies. While it is still too early make conclusions regarding the future potential of this novel approach to waxcap translocation, it is hoped that this technique could become an accepted approach in the future.”

Innovation in ecology survey methods is part of Baker Consultants’ DNA and we are experienced in mitigation and translocation methods for a wide range of species, including waxcaps, reptiles, marine mammals and butterflies. Contact a member of our team today to discuss your project or explore our website for more information. Read more about our expertise in eDNA here.