How we translocated over 2,000 amphibians in just over a month

As part of the Thorpe Park development in Leeds, we are responsible for translocation and mitigation of great crested newts.

Between mid-September and the end of October, we translocated over 2,000 amphibians, representing only a third of the trapping we are due to carry out! Here Katie Watson, our Assistant Ecologist, tells us more about the project that has seen our ecologists monitoring and trapping amphibians along five kilometres of newt fencing.

A daily rota of checking newt traps along the installed newt fencing on site has led to our ecologists translocating 120 great crested newts (which are a protected species) as well as 996 smooth newts, 1,189 toads and 119 frogs from the development area at Thorpe Park, Leeds. So far, a third of the trapping has been completed, with a further third likely to be completed over the next week. 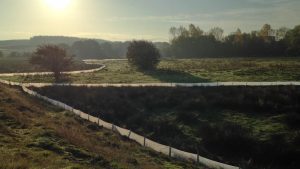 Translocation is essential, as great crested newts are Britain’s largest and most threatened newt, protected under the EU Conservation of Habitats and Species Regulations 2010 and the Wildlife and Countryside Act 1981 (as amended). By following Natural England’s mitigation guidance, we aim to maintain and enhance the population by ensuring high quality translocation habitat as well as maintaining strict welfare standards.

Translocation only forms one part of the mitigation measures for great crested newts at Thorpe Park, as pond creation in the translocation area has also been a vital aspect of the project in terms of ecology. The ponds have central open areas for mating displays, encircled by shallow water margins, which are to be planted with translocated vegetation from the marshland habitat at the development site. Spoil has been used to sculpt the terrestrial habitat alongside the water’s edge to create raised earth banks. Woodland and grassland mosaics have also been created using wildflower seedlings and saplings. 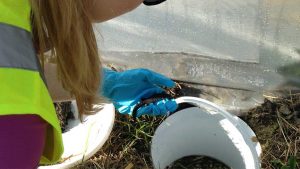 During the initial great crested newt surveys a number of surveying techniques were used including egg search, torchlight surveys and bottle trapping. Since then, eDNA sampling is being used to detect microscopic fragments of DNA biomarkers belonging to great crested newts within waterbodies. This method can be used to determine species occupancy in ponds (i.e. presence/absence) and has the potential advantage of increasing survey efficiency.

Thorpe Park is a business park development in Leeds, currently accommodating 4,500 office workers at several organisations. Current development will expand the facilities for staff on the Park to include a hotel, restaurants and a coffee shop, as well as retail and health & fitness facilities.

Baker Consultants are experienced in a full range of protected species surveys and mitigation measures, including great crested newts. To maintain the high professional standards expected by the Chartered Institute of Ecology and Environmental Management (CIEEM) and our clients, we strictly follow Natural England’s guidelines. For more information, visit our Services home page or go directly to our Great Crested Newt Surveys page.