Environmental DNA (eDNA) testing is a recognised survey technique for establishing the presence or absence of great crested newts in ponds during the breeding season.

Using eDNA sampling has many advantages for projects, including fast turnaround times and potentially eliminating the need for further surveys – both factors which have beneficial cost implications for projects.

eDNA sampling has a number of advantages over more traditional methods of surveying for great crested newts, allowing samples to be collected up until 30th June. The protocol requires only one daytime visit by a licensed ecologist during the newt breeding season to determine presence or absence. This means that eDNA sampling has the potential to reduce the level of survey effort needed in comparison to conventional methods, which require a minimum of four survey visits, each including evening and morning survey, between April and June.

There are a number of scenarios where this technique can benefit projects, including: 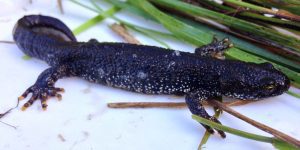 Great Crested Newts (like this one pictured) are European Protected Species.

Great crested newt DNA is released into aquatic environments through shed skin cells, urine, faeces and saliva. The trace DNA can persist in water for several weeks and collected using the detailed sampling and analysis protocol that has been devised (samples should be collected between 15th April and 30th June). Samples are then sent to a recognised laboratory for analysis. The highly sensitive laboratory testing is based on qPCR, allowing detection of great crested newt presence or absence.

Laboratory testing is conducted by our partner NatureMetrics, a highly experienced company who have conducted GCN eDNA analysis since 2015. NatureMetrics follow Natural England’s approved protocol (WC1067), which ensures that the test meets regulatory requirements. As industry leaders, NatureMetrics provide a quality service, and scored 100% in the 2018 proficiency test. 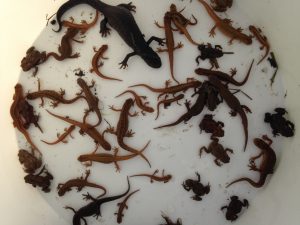 Baker Consultants has extensive experience in great crested survey and mitigation, including major infrastructure project work involving thousands of newts and complex EPS licensing. We have numerous licensed great newt surveyors and we have undertaken eDNA survey work since in 2015.