Ash-dieback to cause UK Ash extinction?

A review of evidence published in the Journal of Ecology (as recently reported by BBC News,) has concluded that the ash tree is likely to be wiped out in Europe.

A fungal disease known as ash-dieback (or Chalara) and the spread of an invasive beetle (the emerald ash borer) are killing off ash trees across Europe; although the beetle has not yet reached UK shores. It is believed that the impact of ash-dieback could mirror that of Dutch elm disease, which largely wiped out elm trees in the 1980s.

Ash-dieback is caused by the fungus Hymenoscyphus fraxineus, which kills the leaves, then the branches, trunk and eventually the whole tree. It is believed to have the potential to destroy 95% of ash trees in the UK.

Ash dieback was first seen in Eastern Europe in 1992 and now affects more than 2 million square kilometres across Europe. Since being first identified in England in 2012 in a consignment of imported infected trees, it has since spread from Norfolk and Suffolk to South Wales.

The emerald ash borer is a bright green beetle native to Asia. The beetle hasn’t yet reached the UK, but is currently spreading west from Moscow at a rate of 25 miles (41 km) a year. It is thought to have reached Sweden. Although the adult beetles feed on ash trees, they cause little damage. It is their larvae that kill ash trees, by boring under the bark into the wood.

If ash trees are wiped out in the UK, research from the Journal of Ecology indicates that the UK countryside will be changed forever. Ash is the second most common woodland tree in the UK, second only to the oak, and our towns and cities have 2.2 million ash trees in and around them. Furthermore, loss of ash trees won’t just change our landscape, but will have a severe impact on biodiversity. There are 1,000 species associated with ash or ash woodland, including 12 types of bird, 55 mammals and 239 invertebrates.

This is a highly complex issue, and we at Baker Consultants keenly follow research developments, such as that in the Journal of Ecology. Harnessing our collective decades of botany experience, our view is that ash will no doubt significantly decline, but that UK extinction is unlikely if the disease follows the usual epidemiology route. This is partly because in Northern Europe many of the ash tree populations are of a very narrow gene pool owing to decimation during the two World Wars and planting of replacements. In the UK, we have a wider gene pool of ash, which increases the likelihood of resistance of certain types of ash to ash-dieback. For this reason, some botanists, including ours, think that UK native ash has a better chance of survival than European strains due to this genetic diversity.  However, many of the imported strains of ash that have been planted in the UK will likely rapidly succumb to ash-dieback.

Following on from this, one of the big debates in the forestry and conservation communities is what to plant in place of ash? We may have to create more mixed woodlands to give fauna and epiphytic flora (a plant that grows on another plant upon which it depends for mechanical support but not for nutrients e.g. ferns or moss) any chance of survival. Also, non-native sycamore trees are often controlled in woods where ash and sycamore co-exist. Given the potential implications of ash-dieback, should this policy of sycamore control be relaxed?

These are questions we need to consider as individual ecologists and as an industry. 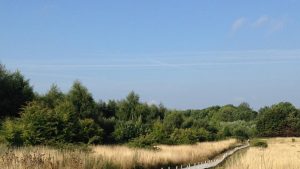