In response to the upcoming referendum on the UK’s membership of the EU, the Chartered Institute of Ecology and Environmental Management (CIEEM) surveyed its members on their views on what Brexit would mean for the UK’s natural environment.

Baker Consultants has made clear why we are concerned about Brexit, publishing several pieces on our views on why the EU is important for nature legislation and the negative implications of Brexit for the ecology and construction sectors and the environment. (See our pieces titled: ‘Brexit could worsen the construction sector’s skills shortage‘; ‘UK’s potential exit from the EU threatens economic and regulatory uncertainty‘; ‘British exit from EU would be bad for UK renewable energy business‘; and ‘The EU is good for business and the environment‘). 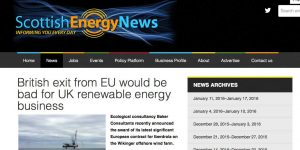 Given this, we welcomed CIEEM’s survey and our Managing Director, Andrew Baker, and other colleagues made up several of the 841 respondents.

Today, CIEEM has publicised the results of the survey, showing that an overwhelming majority of ecology professionals (nearly 87% of respondents) are concerned about Brexit having a detrimental impact on the ecology and environmental management sector as a profession. Only 1% said Brexit would be beneficial.

CIEEM members are concerned about Brexit and its potentially negative impact on our efforts to safeguard our environmental quality and its effects on our health, well-being and prosperity.  Other concerns include less effective and integrated action on climate change, invasive species and plant and animal diseases, as well as negative impacts on protected areas and environmental schemes on farmland.

Here we pull out some of the key statistics from CIEEM’s survey:

Furthermore, the timing of the UK’s proposed exit from the EU could have implications for large infrastructure projects such as HS2.

As CIEEM President, Dr Stephanie Wray, says: A change in regulatory regime, or worse, a policy vacuum, would be disastrous at a time of high construction output, both for the environment, and for the contractors attempting to deliver major projects without a clear legislative framework.”

“It is clear that leaving the EU would have far-reaching effects for those employed in ecology and management of the natural environment. Not only would there be an impact on jobs and livelihoods, with over 50% of our members expressing concern about their own job security, but the industry would be severely damaged. The skills that are playing such a significant role in delivering improvements in environmental quality could be lost, and there would be significant repercussions for the UK’s natural environment.”