The environmental profession is starting to contemplate the implications of the UK’s potential exit from the European Union.

‘Brexit’, as it is termed, is likely to have a disproportionate impact upon the ecology profession, not only because of the likely economic turmoil that would ensue, but also the considerable impact that the UK’s exit from the EU would have on the regulatory framework.

Much of the law that protects wildlife in the UK has its origin in European directives, such as the Habitats and Birds Directives, Environmental Impact Assessment Directive and the Marine Strategy Framework Directive. Baker Consultants’ Managing Director, Andrew Baker, is one of the UK’s experts in nature conservation law and an active member of the UK Environmental Law Association’s nature conservation working group. The working group has been assessing the potential impact of Brexit on nature conservation, and the group’s convenor Wyn Jones has assessed the implications in a recent paper, which is included in full below. 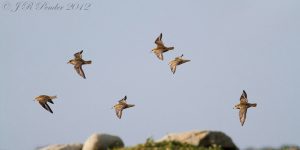 Golden Plovers in flight by J R Pender. Golden Plovers are one of the species that sites can be designated for under the Birds Directive

Andrew has been invited to speak at a meeting of the All Party Parliamentary Group on Biodiversity (APPGB) on 17th November to discuss the ongoing review of the Habitat and Birds Directives. Read more about the meeting here.

Implications of the UK leaving the European Union – nature conservation

Members of the UKELA nature conservation working party have considered this issue for some time. However, we still do not have a clear picture of how, should the UK leave the European Union, the process would be undertaken and the time frame for such a process. The potential impacts on legislation for and affecting wildlife are considerable. Given the uncertainties all that are possible is to list the potential issues. The following is far from complete but provides an indication of the range of issues and complexities to be addressed.

The situation is further complicated by devolution with the respective governments likely to adopt different approaches to the legal framework within their competency, post UK exit from the EU.

In addition the Crown Dependency of Gibraltar is a part of the UK’s territory within the EU and the Sovereign base areas of Akrotiri and Dhekalia on Cyprus under the terms of Treaty of Independence in 1960 the base areas must mirror Cypriot legislation. Cyprus joined the European Union in 2004.

In terms of national legislation most EU legislation is transposed in the main by means of secondary legislation derived from the European Communities Act 1972, but not all. The repeal of the Act could be undertaken quickly. However, given the considerable amount of secondary legislation it is likely to take some time to consider the full consequences of repeal. It is essential that all such secondary measures remain in force unless and until specifically repealed. Many reflect protective measures which either originated, or would have been undertaken, in the UK even if it had not been a member of the EU. In the period leading up to the referendum and post ‘No vote’, EU derived legislation will be difficult to implement and enforce. Without a clear and detailed exit strategy there is likely to be confusion if not chaos.

It is ironic that the UK holds the presidency of the EU in the second half of 2017.

Legislation for and affecting wildlife

The key wildlife Directives are the EC Birds Directive (79/409/EEC) (codified 2009/147/ EC) and the Habitats Directive (92/43/EEC). The former is transposed by means of the Habitats Regulations and Part I Wildlife Countryside Act 1981 as amended, the Nature Conservation (Scotland) Act 2004 and the Wildlife (Northern Ireland) Order 1985 as amended. The latter is transposed by means of Habitats Regulations.

Some issues and / or questions

Most terrestrial sites have been notified as Sites of Special Scientific Interest (SSSI) (Areas of Special Scientific Interest in Northern Ireland (ASSI)) and will be afforded a measure of protection but not as robust as that provided by the Habitats Directive. The description of such sites as ‘European’ may need to be changed to a term such as ‘International’ but the level of protection should continue. The implications for land transfer and registration of any substantive changes need to be addressed.

The implications for management agreements will need to be considered. The European interest features will be of national importance and therefore the agreement could be re-assigned to Section 15 Countryside Act 1968 to protect and manage SSSIs. Such an arrangement would need to be formalised through appropriate legislation.

Consents given by the statutory nature conservation bodies under the Regulations could be revoked or re-assigned to the underpinning SSSI / ASSI legislation where possible?

Orders made by the Secretary of State would ultimately need to be renamed as would any measures made in association with individual orders. All relevant owners and occupiers would need to be given notice of the changes.

I am not aware of byelaws being made by means of the Regulations but if any are in force they would need to be renamed and appropriate notices etc. made to publicise changes.

European marine sites (SPAs and SACs) are not necessarily underpinned by national legislation provided by the declaration as Marine Nature Reserves at Lundy, Skomer and Strangford Lough and / or designation as Marine Conservation Zones (MCZs) under the Marine and Coastal Access Act 2009. However, those European sites not already MCZs could be so designated with minimum administrative burden?

The protection afforded by the Wildlife and Countryside Act (Part 1) in the main mirrors the directives (intentional / reckless v deliberate). The one major difference is the strict liability offence under Article 12.1(d) Habitats Directive which could be incorporated into domestic law.

Protection would be substantially weakened if there were a loss of the tests of no alternatives and action not detrimental to the maintenance of the population(s) of species at favourable conservation status (Article 16).

The power under the Regulations to issue licences for preserving public health and safety or other imperative reasons of overriding public interest including those of a social or economic nature is not available under national legislation.

Assessment of plans and projects

It would be important to ensure that where plans and projects have been carried out the compensation secured and the relevant agreements underpinning the measures are retained.

It is important to ensure that where plans and projects have been reviewed under Regulations and amended or revoked, the reviews and consequent changes are not nullified. A large exercise was carried out by the nature conservation bodies and the then Environment Agency / SEPA to review consents.

We have to accept that BREXIT may occur and not refrain from suggesting measures that might minimize harm so as to maximise the perceived harm of BREXIT as an argument against it.

All domestic secondary transposing measures should remain in force unless and until specifically repealed.

The need for owners and occupiers consent for reclassification of conditions and agreements under domestic legislation should be avoided.

All the above are likely to place considerable administrative burden on governments and their agencies and will have practical implications as to the management and protection of natural habitats and wild fauna and flora.

We are at the known unknowns’ stage, gathering information and listing issues to be addressed. We have no idea of the consequences and of the unknown unknowns. It will be a perilous and uncertain time for nature conservation in the UK.