As recently reported by BBC News and BBC Radio 4, Natural England’s consultation on proposed changes to how it implements protected species legislation (especially for great crested newts) ends this week.

However, many in the industry (including developers, consultants, ecologists and voluntary organisations) have long expressed the view that the current administration of the legislation is not only overly strict and costly to implement, but also does little for the protection of the species. The fundamental problem was the principle of protecting each and every newt, rather than looking to maintain the species at a population level, which is what is actually required by the law.

Our Managing Director, Andrew Baker, is an expert in nature conservation law and has been working with the Chartered Institute of Ecology and Environmental Management (CIEEM) to assist Natural England in the run up to this consultation.

The new proposals by Natural England aim to make the current licensing system more flexible and strategic while ensuring that populations of newts are protected.

“This isn’t a change in the law, but rather a change in the way that the law is implemented by Natural England. For some time, I have felt that the legislation hasn’t been interpreted properly: it doesn’t make ecological sense to protect every single newt while ignoring the health of the overall population. This proposed change in how Natural England is implementing the law is very much welcomed and I feel that it much more closely reflects the letter of the law and will also have greater conservation benefit”, says Andrew.

The great crested newt (Triturus cristatus) is the largest of Britain’s three indigenous newt species. They are black in colour with an orange and black spotted belly. The main threats to the survival of the great crested newt are habitat destruction and fragmentation as a result of anthropogenic development. Emerging infectious diseases such as chytridiomycosis, caused by a pathogenic fungus, also pose a significant threat to this species. 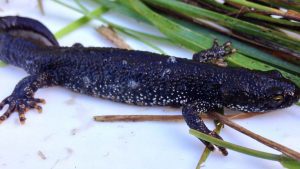 Great crested newts and their breeding sites are protected by the EU Conservation of Habitats and Species Regulations 2010 and the Wildlife and Countryside Act 1981 (as amended).