Baker Consultants ecologist Steve Docker has recently completed an innovative research project, which used unattended acoustic recording devices to record the songs produced by male European nightjar Caprimulgus europaeus – a rare bird species that is listed on Annex 1 of the European Community Birds Directive 2009 and is an amber-listed species of conservation concern.

An accurate measure of the number of breeding pairs is essential when evaluating a site for nightjar and Steve’s research set out to identify whether different song types could be used to establish probable breeding. It is thought that acoustic recording technology has not been used for this purpose before for this, or any other, species.The standard survey method used by most surveyors is based upon a co-ordinated count of the number of ‘churring’ males.  However, singing is only indicative of possible breeding and does not provide evidence that birds have paired.  Furthermore, this method can be labour intensive and may over-estimate the number of breeding pairs because some singing males will be unpaired.

Male nightjars produce two song types, one with an abrupt ending and the other with a distinctive terminal phrase, see Figures 1 and 2.

Using nightjar songs, recorded on automatic devices placed in the field, the study looked at whether this change in vocal structure is linked to pairing status.  It revealed that the output of nightjar song with a terminal phrase was significantly greater for probable paired males – and is therefore indicative of a breeding pair being present.  This finding has the potential to provide a minimally intrusive means of measuring the number of nightjar breeding pairs at site level or as part of a national census of the species, see Figure 3.

Scan the QR code to listen to a nightjar song (a ‘paired’ male). 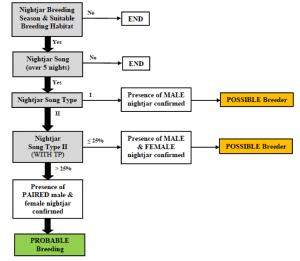 In the future Steve aims to publish a scientific paper and also produce a nightjar song type recogniser to support the practical application of this ground-breaking research.

To find out more about this nightjar bioacoustics research please email s.docker@bakerconsultants.co.uk.