She has been recording lion vocalisations as part of her research into leonine communication. The recordings will be used to build a bioacoustic profile of the African lion (Panthera leo). It is hoped that this profile will result in the creation of a pioneering non-invasive method of monitoring lion populations. With only around 3,100 wild lions left in South Africa, it is a crucial time to implement innovative conservation measures to ensure their survival. This is an exciting project carried out on opposite sides of the world to protect an iconic species. 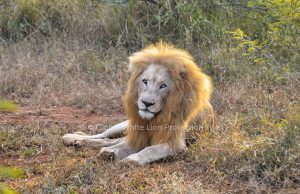 The Global White Lion Protection Trust has reintroduced white lions into their endemic habitat of Timbavati, South Africa, where they had previously been extinct in the wild for over a decade. The white lions are a genetic rarity, bringing valuable genetic diversity to the Kruger-to-Canyons Biosphere; an area in which lions are at serious risk of a population crash. The white lions also have immense cultural and spiritual significance, with long-standing legends of white lions existing in the oral knowledge of the high priests of Africa for over 400 years. Linda Tucker (CEO) and Jason Turner (head lion ecologist) at the Global White Lion Protection Trust have supported Emma’s research.

“The reintroduction of the white lions back in their endemic range represents a critical landmark in conservation history” – Dr Ian Player, late Patron of the Global White Lion Protection Trust

Emma joined Baker Consultants in October 2014, mid-way through her studies in Wildlife Conservation at Nottingham Trent University. She has been assisting senior ecologists with their work in the office and in the field.

She has also been responsible for building a new technological app, which will be used during future wildlife and habitat surveys. The bioacoustics team at Baker Consultants have supported Emma with her study, with skills gained analysing bat calls in the UK being applied to lion roars in the African bush veld. For further information, please contact echeckley123@hotmail.co.uk