Our Ecologists contribute to Nathusius’ Pipistrelle Research featured on BBC1

Five of our ecologists contributed to a Nathusius’ pipistrelle (Pipistrellus nathusii) research project that featured on The One Show on BBC1 as part of the film Bats Without Borders by Icon Films!

Our Senior Ecologist Matt Cook led the project for Nottinghamshire and Rutland Water and four of our other ecologists, Courtenay Holden, Katie Watson, Rich Hall and Kelly Clark have also been involved.

Background to the project

After a Nathusius’ pipistrelle was found to have migrated from Great Britain to the Dutch coast in 2013, scientists’ previously held assumption that British bats were unable to migrate across the North Sea was challenged. Bats Without Borders set out to find out whether some of the UK’s bats were migratory and if it was possible for a bat weighing only seven grams to cross the English Channel or the North Sea. 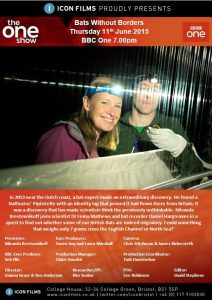 Several bat groups were involved in the Bat Conservation Trust and University of Exeter study, including Nottinghamshire Bat Group, for which Matt is project co-ordinator. Matt led the project for Nottinghamshire and Rutland Water, overseeing the catching of 46 Nathusius’ pipistrelles so far. These bats have all been adult males, with five recaptures from within Nottinghamshire and at Rutland Water, one of which has actually ‘migrated’ over 10km along the River Trent. The project group hope to catch a breeding female, which they hope to radio-track back to a roost. This would be an important piece of research, as there are currently no known active roosts on mainland Great Britain. Two to three more maternity roosts were discovered this summer, but none of any notable numbers.

The Nathusius’ pipistrelles are associated with freshwater habitats, mainly large water bodies, and their diet largely consists of medium-sized flying insects such as aquatic flies, midges (particularly non-biting midges), mosquitoes and caddis flies. They feed by aerial hawking, meaning they pursue and catch their prey in flight. In comparison to other pipistrelles, they typically fly higher, faster and further, and have distinctive social and advertisement calls. They typically weigh between six and 13 grams.

Distribution-wise, Nathusius’ pipistrelles occur across mainland Europe, generally migrating north-east to south-west in autumn. They were first recorded in the UK in the 1940s in Shetland and were considered only a migrant visitor to the UK until the 1990s, when a small number of mating and maternity colonies were found. Overall, they are considered widespread, although uncommon. Less than ten mainland Great Britain maternity roosts have been recorded and none have been found to be active since 2012 (the last roost was in Kent). This means there are no major hibernation sites.

There is still much that is unknown about Nathusius’ pipistrelles in the UK, including the nature of their movements in and out of the UK, their migration routes and origins, their population status and their distribution. We hope that the research Matt, Courtenay and Katie have been involved in provides an important stepping-stone to better understanding the behaviour of this fascinating species.

The full results from the stable isotope analysis of the discreet fur samples taken from the bats caught in 2014 are due very soon. However, the preliminary results suggest that most of the Nathusius’ pipistrelles are likely to have moved quite significant distances.