Barry Wright, one of Baker Consultants’ Principal Ecologists, has along with Professor Ian Rotherham from Sheffield Hallam University developed a new system for documenting hedgerows; providing information on their biodiversity and data to inform mitigation and translocation strategies.

Barry’s HEDGES system is featured in full in the Summer 2015 edition of Conservation Land Management.

Barry began developing his system after discovering flaws in the Hooper formula typically used for aging hedgerows. Hooper had asserted that the average number of woody species present in a 30-yard section of hedgerow could be used as an indication of its age. This is based on the assumption that hedges were initially planted with one species and have acquired more at the approximate rate of one per 100 years. However, Barry found instances where a hedge that documentation revealed as being 200 years old could, applying the Hooper rule, appear to be in the region of 400-700 years old.

Barry said: “I believe that most hedges originally consisted of more than one species and that the complex changes since their creation should not be be simplified to just giving an age to a hedge. Hedgerows are a living history book waiting to be read. We just need to learn the language”.

Barry consequently developed the Hedgerow Ecological Description Grading and Evaluation System (which conveniently abbreviates to HEDGES!) as part of his PhD, which can be used to create replicas of historic hedgerows. One of the three levels of detail that can be recorded using the system involves recording the abundance of tree, shrub and ground flora species every four metres along a hedgerow and giving each an abundance score. This can then be used to produce a planting list that forms the basis of creating a replica hedgerow to reflect the character of the local hedgescape.

Use of HEDGES to replicate historical hedgerows

Following this method, selected lengths of seven historical hedgerows from across Yorkshire were replicated on a farm in North Yorkshire as part of the Historical Replica Hedgerow Project (HRHP). They have been replicated along a hedgeline known to have been present in 1644 at the Battle of Marston Moor, but where the majority of the hedgerow had been lost. The lengths of hedgerow were chosen specifically to represent the historical origins and development of hedges over time and the site has access as part of an educational resource provided by the farmer. The oldest examples replicated can be traced back to the Norman conquest and possibly earlier.

The replication process carried out by Barry does not aim to justify unnecessary destruction of hedgerows, but help provide further guidance as to how mitigation for loss can be made more effective and more authentic. 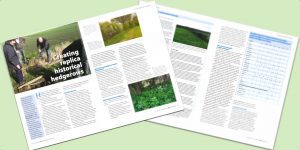 Innovation in ecology survey methods is part of Baker Consultants’ DNA and we are experienced in mitigation and the translocation of a wide range of species, including waxcaps, reptiles and butterflies.

Read our case studies for more on: