The case has raised some very interesting points, particularly on the adequacy of ecological surveys and Biodiversity Net Gain (BNG). Andrew Baker, Baker Consultants’ Managing Director, presented evidence to the inquiry on behalf of Mansfield District Council. Below, he discusses the significance of the case.

The main issues were the effects of the proposal on two Local Wildlife Sites protected under the Local Plan and a Local Nature Reserve. Also at issue was the ecological impact from the loss of habitats within the quarry, which supported two priority habitats: woodland and Open Mosaic Habitat on Previously Developed Land (OMHPDL) (although the presence of the latter was disputed by the Appellant). The quarry and surrounding land was also found to be of County value for foraging bats, including by two species that are rare in Nottinghamshire.

Immediately prior to the inquiry, the site was cleared of all vegetation. It was not clear why this was done, but it meant the accuracy of the previous vegetation surveys could not be checked on-site. Evidently, this raised key issues regarding the baseline for the subsequent ecological assessment, given that the provisions within the Environment Act 2021 to prevent pre-development site clearance works are not yet in force. 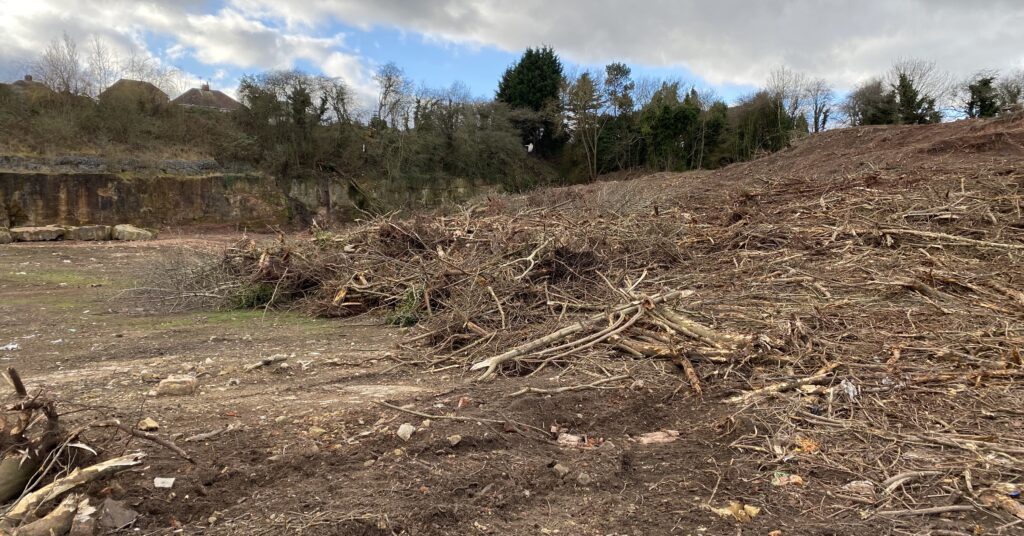 Gregory Quarry cleared of vegetation prior to the public inquiry.

The site had been surveyed by three respected ecological consultancies, however, there was evidence before the inquiry to show that no-one had properly identified the habitats within the quarry floor as OMHPDL. The evidence within the Appellant’s own reports pointed to OMHPDL being present and the Inspector, not being able to verify the status of the habitat (due to the site clearance works) took a ‘precautionary approach’. This had two knock-on effects: firstly, the Inspector consequently found that the lack of comprehensive invertebrate surveys meant the full impact of the scheme could not be assessed, following our evidence to the inquiry about how important OMHPDL is for insects and, secondly, the Appellant’s BNG calculations were not reliable.

Significantly, the Inspector supported our evidence that, while the quarry had been cleared prior to the inquiry, the site was already revegetating from the existing seed bank which remained (as the soils had not been removed off-site). It was therefore likely that OMHPDL would recolonise if the site remained undeveloped, i.e. the future baseline conditions would not be bare ground.

As well as the lack of invertebrate surveys, the Inspector also found the Appellant’s bat surveys did not meet survey guidelines. Surveys were carried out by three ecological consultancies, the first of which concluded that the habitats were of ‘high’ value for bats, but yet full surveys of the site were not carried out. When more surveys were carried out in 2021, the site was found to support seven species of foraging bats, including a record of Serotine, a species which has only been recorded five times in Nottinghamshire. The Inspector concluded that, contrary to the Appellant’s assertions, the site supported a significant assemblage of foraging bats and the bat survey effort was therefore inadequate to fully characterise the value of the site.

The Inspector’s conclusions on BNG were significant and are likely to draw attention. The Appellant’s evidence, notwithstanding the disputed presence of OMHPDL, showed a net loss of biodiversity on-site, and therefore a requirement for off-site BNG provision. The Appellant, however, provided no information on how that BNG would be delivered, instead simply relying upon a draft S.106 agreement. The Inspector found the approach to be lacking for two reasons, stating in paragraph 35 of her report:

“….the Appellant has not identified a habitat bank and Mansfield District Council does not have such a bank. Therefore, I cannot be satisfied that the off-site net gains would be appropriate or provided in a suitable location as there is no control over where the Council might allow it to be provided and there is no public scrutiny over details to be approved under a legal obligation. Therefore, the natural environment might not be left in a measurably better state than it was beforehand, especially as I have not found in favour of all of the ecology evidence submitted by the Appellant. Whilst the NPPG says that off-site measures can sometimes be secured from habitat banks it does not say that off-site measures are always appropriate. It says that that planning obligations can, in “appropriate” circumstances, be used to achieve such objectives, but due to the lack of detail about how and where these net gains will be achieved, including the lack of any identified habitat bank, I consider that the S.106 agreement would be inappropriate to achieve the BNG. ‘ [our emphasis]

The Inspector was not only dissatisfied by the lack detail on how the BNG would be delivered, but also highlighted the need for public scrutiny. In our view, both these elements are significant to the body of emerging inquiry decisions on BNG.

The Inspector concluded that there would be significant harm to the biodiversity of the site as a whole and, consequently, the appeal was dismissed.

The Inspector’s decision can be viewed here.

The Baker Consultants team is highly experienced and we are passionate about what we do. If you need advice related to ecology, surveys or conservation, then please get in touch with us via our contact form on the website, or you can call us on +44 (0)1629 593958 or email us on info@bakerconsultants.co.uk.

Carlos Abrahams, Director of Bioacoustics at Baker Consultants, will be hosting a bioacoustics session at the UKAN+ Monitoring UK Biodiversity Symposium.

Baker Consultants will be attending the Westminster Energy, Environment & Transport Forum’s online conference on the Next Steps for Biodiversity and Wildlife Protection in England on Wednesday 15 June.