For any bird, successfully raising chicks can be a tricky business, particularly for a ground-nesting bird such as the curlew (Numenius arquata), Europe’s largest wading bird.

The curlew is listed as ‘near threatened’ by the IUCN and is a UK BAP (Biodiversity Action Plan) priority bird species due to the international importance of breeding and wintering UK populations, so when our Ecologist Martin Ledger found a curlew nest with eggs during a breeding birds survey, he documented what he saw. Following his second visit to the nest, he is still debating whether the eggs he originally found had successfully fledged or been predated, most likely by a hedgehog.

On Martin’s first visit, he found a curlew nest hidden in the grass. 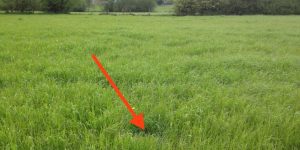 Inside the nest were four unhatched eggs. Curlews typically lay between three and six eggs, which are incubated for around a month before hatching.

Six days later, when Martin returned, he found the scene shown below: the eggs had either hatched or been predated. If predation was the reason for the broken egg shells, Martin believes that hedgehogs would be the prime suspect, as broken egg shells are a common trait when hedgehogs predate a nest, whilst other predators generally leave less mess. 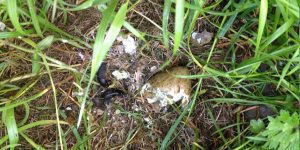 However, finding egg shells and no chicks in the nest doesn’t necessarily mean the nest was predated. Curlews are usually precocial, meaning that the chicks generally leave the nest as soon as they are born and find food for themselves in thick cover, whilst they wait to develop their flying feathers. So the chicks could have hatched successfully and made a quick getaway!

The jury is still out on whether these curlew eggs hatched and fledged, but either way it has made for a lively debate and given us a further glimpse into the breeding life of a curlew.