Our Technical Director, Carlos Abrahams, was invited to present a talk at the recent Herpetofauna Workers Meeting.

This national conference has been running annually for nearly 30 years, and attracts around 200 delegates. It is the main meeting covering reptile and amphibian ecology and conservation in the UK. 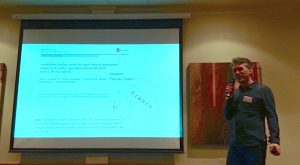 The research showed that common adaptable species remained widespread, but that some rarer species, with more exacting habitat requirements, declined significantly. The main reasons for these were pond loss, increasing urbanisation and changes in agricultural practice in the area, with shifts from pasture to arable production.

However, the benefits of practical conservation effort were also demonstrated, as new ponds created in areas of good quality habitat , were quickly colonised by a range of amphibians. This shows that habitat creation/restoration can play a valuable role in conservation, counteracting the adverse effects of land use change and development.