Eurasian Lynx to return to UK after 1,300 year absence?

Over 1,000 years ago, human persecution caused the UK extinction of the Eurasian lynx.

Along with the loss of other apex predators, such as wolves and bears, this has led to a biological imbalance, with some prey species, such as deer, effectively having no predators to keep their populations in check. This has subsequently affected biodiversity, with increasing numbers of deer, for instance, being blamed for overgrazing and preventing the natural regeneration of woodlands, which is in turn negatively impacting a wide range of flora and fauna.

In recent years, campaigning organisations such as the Lynx UK Trust have called for a controlled and monitored reintroduction of the Eurasian lynx to the UK in an attempt to address issues such as those above. Dr Paul O’Donoghue, Chief Scientific Advisor to the Lynx UK Trust, said:

“The lynx is one of the most enigmatic, beautiful cats on the planet. The British countryside is dying, and lynx will bring it back to life”.

The Lynx UK Trust recently ran a public opinion survey on their website and, if given the go-ahead by Natural England and Scottish Natural Heritage, they will release up to 18 Eurasian lynx onto private estates in Aberdeenshire, Cumbria and Norfolk. 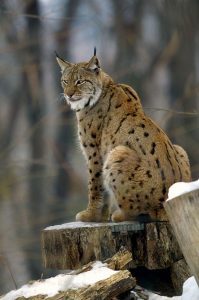 Why reintroduce an extinct animal?

The Eurasian lynx is a medium sized, elusive cat, currently found in Western Europe, central Asia and Russia and a predator of deer and small mammals such as rabbit and hare.

It is hoped that the reintroduction of lynx would create more natural ecosystems, attract ecotourism and control deer populations, reducing economic damage to forestry and allowing forests to regenerate naturally. However, it is uncertain as to whether lynx would catch enough deer to cause this benefit, particularly in Scotland where red deer, which are typically too large for lynx to catch, are the main culprit in preventing woodland regeneration. There are concerns regarding predation of sheep and impact on endangered bird species, such as capercaillies in Scotland and also questions regarding the choice of Eurasian lynx for reintroduction: the Iberian lynx is the closest surviving relative of the extinct British lynx and is currently the most threatened species of cat worldwide, whereas the Eurasian lynx is thriving.

Putting aside the specifics of this particular reintroduction proposal, the value of apex predators to ecosystems has been demonstrated by the relatively recent reintroduction of wolves to Yellowstone National Park in the USA. This reintroduction not only reduced the elk population, it also altered their behaviour:

“Researchers have documented major behavioural effects whereby elk in YNP [Yellowstone National Park], under the risk of predation by wolves, have altered their habitat use, movements, group sizes, vigilance, and other traits” (Ripple and Beschta, 2011).

This has affected elks’ browsing of trees, leading to new recruitment of woody browse species such as aspen and willow. Numerous positive impacts have resulted from this, including an increase in the abundance of certain songbirds and an increase in beaver numbers, which has in turn benefitted other species including amphibians, reptiles, fish and other mammals. Read more about the impact of the reintroduction of wolves on trophic cascades here.

This reintroduction proposal is more than just the aim of a small wildlife conservation charity; the UK is obliged under the European Habitats Directive to ‘study the desirability of reintroducing species’ that have become extinct from our region. Furthermore, the Eurasian lynx has been successfully reintroduced into other European countries, becoming a draw for wildlife tourism.