More key figures from the construction industry are adding their voice to the campaign for the UK to remain in the EU.

As reported in The Guardian, David Thomas the Chief Executive of Barratt Developments, the UK’s largest homebuilder, has stated that the UK leaving the EU would hit housebuilding workforces hard, in turn exacerbating the housing crisis.

A recent survey by Building magazine indicates that David is not alone in his views. Results show two-thirds of the construction sector back continued EU membership, with over half of those surveyed believing that Brexit would reduce foreign investment and drive up both labour and material costs.

One of the key predicted impacts of Brexit for the construction sector is an increase in the current skills shortage. As David states, the main challenge for housebuilders is labour availability. In terms of Barratt, 30-40% of their London workforce originate from mainland Europe. Similarly, Mott Macdonald the UK’s largest independent engineering firm predicts they would face a significant skills shortage if the UK opts out of the EU and property developer Berkeley employs half of its subcontractors from eastern Europe. If the free movement of labour were curtailed following Brexit, the resulting skills shortage would affect the housebuilding industry’s ability to build new homes.

Nationwide, official figures show that almost 12% of the UK’s 2.1 million construction workers are from other countries, with the majority from the EU. The true figure is believed by experts to be even higher. By far the most common country of origin for foreign UK construction workers is Poland, followed by Romania.

An open letter backing the vote for the UK to remain in the EU has been signed by The Shard contractor Mace, property firm Jones Lang LaSalle, and Mott MacDonald.

The skills shortage is one of the main reasons for housebuilding having high numbers of overseas workers and this is partly due to the financial crisis and subsequent recession, which caused a slump in construction projects. Migrant workers have typically been seen as a short-term fix. For instance, research by design and consultancy firm Arcadis found that 53,000 extra bricklayers were needed to build the target of 200,000 new homes a year.

Baker Consultants’ managing director Andrew Baker points out that a skills shortage resulting from the UK leaving the EU will not be confined to the construction industry: 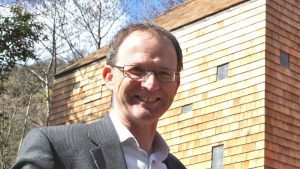 Andrew Baker, Managing Director of Baker Consultants, agrees that the UK should remain in the EU

“I believe Brexit would have a disproportionate impact upon the ecology profession, not only because of the likely economic turmoil that would follow, but also the impact it would have on the regulatory framework. For instance, much of the law that protects UK wildlife originates in European directives. Brexit would throw our environmental legislation into disarray.

“It would also have specific consequences for us at Baker Consultants, as our in-house team is truly international and we have some of the best scientists from across Europe working for us. Exiting the EU would be a major constraint to our ability to recruit key talent and would damage our ability to compete internationally.”

Read more on why Baker Consultants believes the UK should remain in the EU in our article for Scottish Energy News.